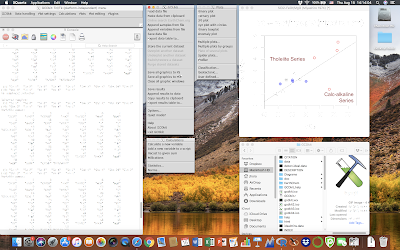 GCDkit not starting on Chinese locales?

Several users from China have reported problems with running GCDkit 5.0.

The troublemaker is the newly introduced Eartchem module, as already mentioned here: http://blog.gcdkit.org/2018/04/version-50-has-been-just-released.html#comments

The problem is clearly with multibyte encoding of Chinese characters. But the bug may be also affecting the users on other locales/systems, including Mac.

The fix is relatively simple, though. Please, in the line 216 of the EarthChemFUN.r file, replace the text by:

Please accept my apologies. The next version of GCDkit (6.0), now at the stage of beta testing, will have this problem solved.

PS
Special thanks go to Jiacheng Tian and Shi-Chao Li for their helpful bug reports and patience.

Posted by Vojtech Janousek at 15:35 No comments:

By far the most common bug report that we are getting concerns the implementation of the total alkali-silica (TAS) diagram of Le Bas et al. (1986) in GCDkit. But in reality, it is  not a bug, but a feature. One should be aware of the fact that the analyses plotted have been recalculated on 100% anhydrous (volatile-free) basis.  This is in accordance with the recommendation of the IUGS  Subcommission on the Systematics of Igneous Rocks (Le Bas et al. 1986; Le Maitre ed. 2002).

On the other hand, such a recalculation is not carried out for subsequent modifications of the TAS diagram (Cox et al. 2002; Middlemost 1994), where rough data are plotted.

In any case, using analyses with too high volatile contents is to be avoided, as they are suspicious from being affected by alteration and attendant mobility of alkalis.